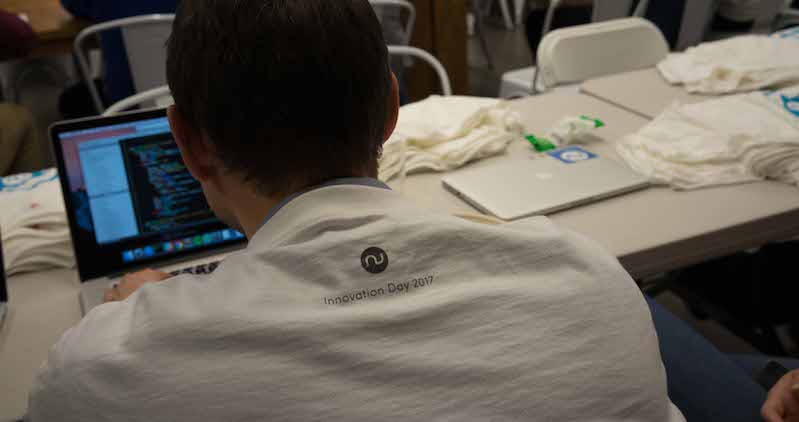 When you work in Silicon Valley, there are a few things you start to take for granted. Free food. Stock options. Happy hours at the office. And hackathons. Devoting a day to focus on passion projects with the goal of having a working prototype by the end of it is an idea that was born in the Valley, by engineers, for engineers. Here at Narvar, the whole company gets in on the opportunity to innovate — sales, marketing, customer success, finance, talent and creative — which yields some process solutions and sales-ready business cases in addition to code.As a marketing person, I personally loved my experience as a first-time hackathon participant: being able to collaborate closely with people across the organization I don’t often work directly with, focused on solving a specific problem against the clock. And although we are all ultra-competitive, we were still able to pull in experts from other teams to help with some aspects of our project - we can’t seem to refrain from helping each other succeed. As we’ve grown (Narvar has more than doubled in size in the last year, adding a number of these new disciplines as part of that growth), the dynamics of what we call ‘Innovation Day’ have evolved. I chatted with Tom Facer, Software Engineer in Test at Narvar, who initiated and has been the driving force behind our event.[caption id="attachment_896" align="alignnone" width="800"]

Tom Facer (foreground) and our judges (L-R): Maria, Harsh & Chait.[/caption]You’ve done this for 2 years now, with very different sized groups. Are there things which happened this year you didn’t expect?I didn’t expect to see the diversity of the teams and their disciplines. Last year, I formed the teams based on a number of criteria which ensured that people of different disciplines worked together. This year, emphasis was placed on organically-formed teams, for two reasons: the group was much larger, so it wouldn't have been practical to build the teams myself; and as the event continues to grow, people start knowing what to expect and are more proactive about pulling together the right set of skills for the task at hand.What surprised you most about the projects this year?The completeness of them! This year the teams had around an hour less time to complete their projects. Last year, I scheduled time for the teams to get together before the day to plan. Because this year I wanted to have less intervention and encouraged the teams to form dynamically, I left them to organize on their own. The vast majority of the teams had working POCs, that were also accompanied by polished presentations and documentation![caption id="attachment_860" align="alignnone" width="800"]

Finance, Marketing, Sales, Design, Engineering and Front End collaborating on a software feature project.[/caption]I may be biased, but I felt that some of the strongest projects came from teams that had more diversity of disciplines. Hackathons are always associated with coding and highly technical projects which, for someone without a technical background, can be very intimidating. Innovation Day is intended to be an event that encourages ambitious technical projects, although not exclusively. There’s still a danger that teams could be very engineering-centric. I was pleasantly surprised to see very diverse teams with members from Product, Sales, Marketing and Finance, getting involved and really bringing their expertise to the projects. This showed especially in the presentations to pitch the projects to the judges. As mentioned, we had fully functional POCs, which were coded in a single day and then backed up with very well-polished presentations. In one case, the team roadmapped additional features and a projected ROI! That's what Innovation Day is about; allowing people the time and leeway to build and develop ideas into real projects.

One of the most critical ingredients to a successful day is to be sure that the participants get the bandwidth to be fully invested without the usual distractions.

What did you observe with folks outside of engineering?My favorite project from last year was the employee photo board (a wall chart with Polaroid-style photos of every employee with their names). It was a project undertaken at the last minute by our Creative Director, Eric, who was not in a team, but looked to solve a real problem faced by new people coming into a rapidly growing company and not knowing who anyone was. That no-code project really captured what this day is all about: it doesn't have to be technical, but it should make a big impact in a short time, and is the reason we call it 'Innovation Day'.This year, not only was there a similar type of project to redesign our event booth in a sustainable way, but also a lot of participation from non-engineering folks on teams that were tackling product or software solutions. The winning team this year was led by data science working with product, implementation and engineering to develop a key resource which will be instrumental in a lot of our work. I hope that more non-engineering folks saw the impact their colleagues had and jump at the chance to be involved in the next one.[caption id="attachment_859" align="alignnone" width="800"]

Scale model of an event booth concept.[/caption]Any favorite moments?Both Innovation Days have involved the same favorite moments:1: The morning briefing - everyone is excitedly picking up their t-shirts and you can feel the anticipation in the air. Everyone is really excited for the day ahead.2: The presentations - you've spent all day consumed by this project you're working on, that you almost forget that there are other teams out there working on theirs too! It's really amazing to see what the teams produce in just a single day, and present in an honest and often hilarious manner.Where do we go next?Firstly, my focus is to get one or more of the projects into the codebase. Prizes are fun, and the opportunity to work on something outside of your usual domain is awesome, but what everyone really wants is to see their projects become reality. So let's roadmap it!As far as moving Innovation Day forward, I want to grow it a little more organically. The first couple are POCs in themselves, so now that people are on board, the uptake should grow and grow.What’s the most important tip you would offer to anyone wanting to hold a successful hackathon?One of the most critical ingredients to a successful day is to be sure that the participants get the bandwidth to be fully invested without the usual distractions. Part of the reason so much can be accomplished in such a short time is that teams are able to focus on the project at hand.[caption id="attachment_861" align="alignnone" width="800"]

The winning team included members from Data Science, Product, Engineering and Implementation.[/caption]Come work with us! Narvar is hiring for engineering and non-engineering roles. We hope you’ll be here for our next Innovation Day.